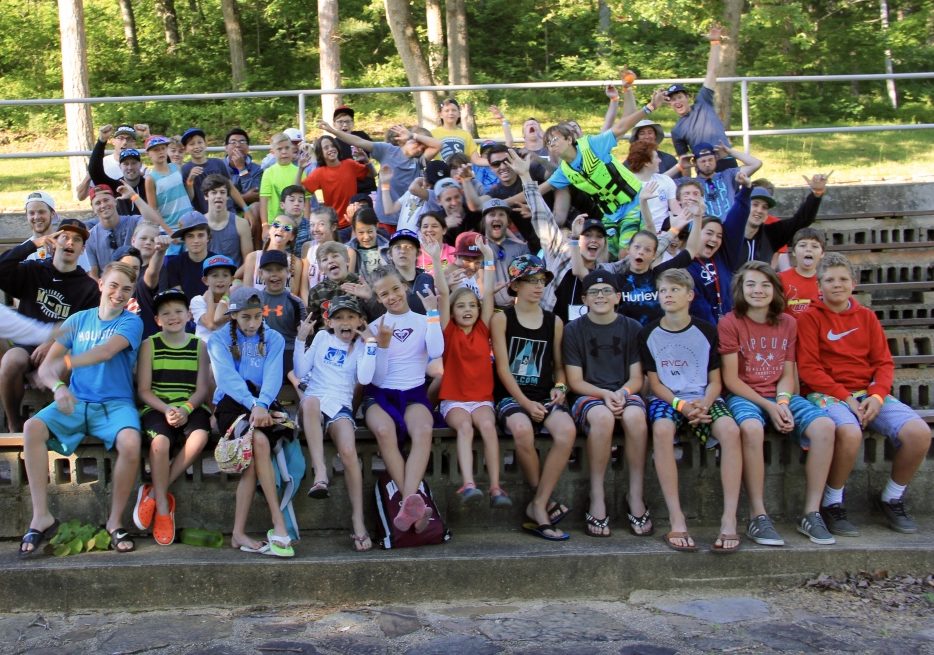 Ride With Us Wakeboard Camp

By Kirby's School of WakeJune 29, 2016Blog
No Comments

Home » Ride With Us Wakeboard Camp

Every summer, Kirby’s School of Wake partners with the Eternal Riders Ministry to host a three-day wakeboard camp for ages eight and up. After months of preparations and planning, the check-in day finally arrived. On a warm Monday afternoon in June, 52 campers arrived loaded down with sleeping bags, snacks, backpacks, and wakeboards chatting with their families anxiously awaiting their turn to check in. 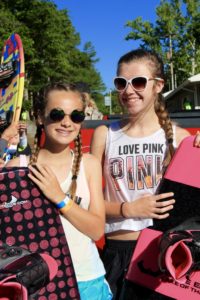 Once checked in, they followed the map to their cabins, met their counselor, claimed their bunk, and said goodbye to mom and dad until Wednesday.

That evening, the campers met in the auditorium where they got the rundown on the week’s activities and were introduced to their ride group. Ride groups are the groups that the kids spend their days on the boat with each led by a staff counselor. These groups are determined by age and ability level. The ride groups were all given the opportunity to come up with a team name and chant. The teams then headed outside for a life size tic-tac-toe relay race. 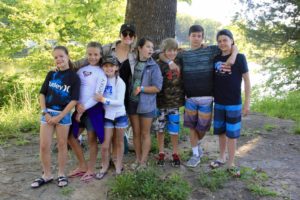 The winning team emerged after some VERY close matches!

Heading back into the auditorium, Kirby closed the evening by premiering his new video ,Wake by Faith, that was featured on Alliance Wake this spring and gave a message on how to pursue God through all the different waves of life using with an on-stage wakeboard example. You can watch the video here.

The next morning everyone hurried to breakfast, smiled for the group picture and then hit the water! Each camper receives five wakeboarding sets in their time at camp. We were thankful to have eight boats and coaches give their time to help make this an experience the kids will never forget. Seeing eight fully-equipped wakeboarding boats lined up, resting peacefully in the calm water with a layer of morning mist rising around them is quite the sight each morning. 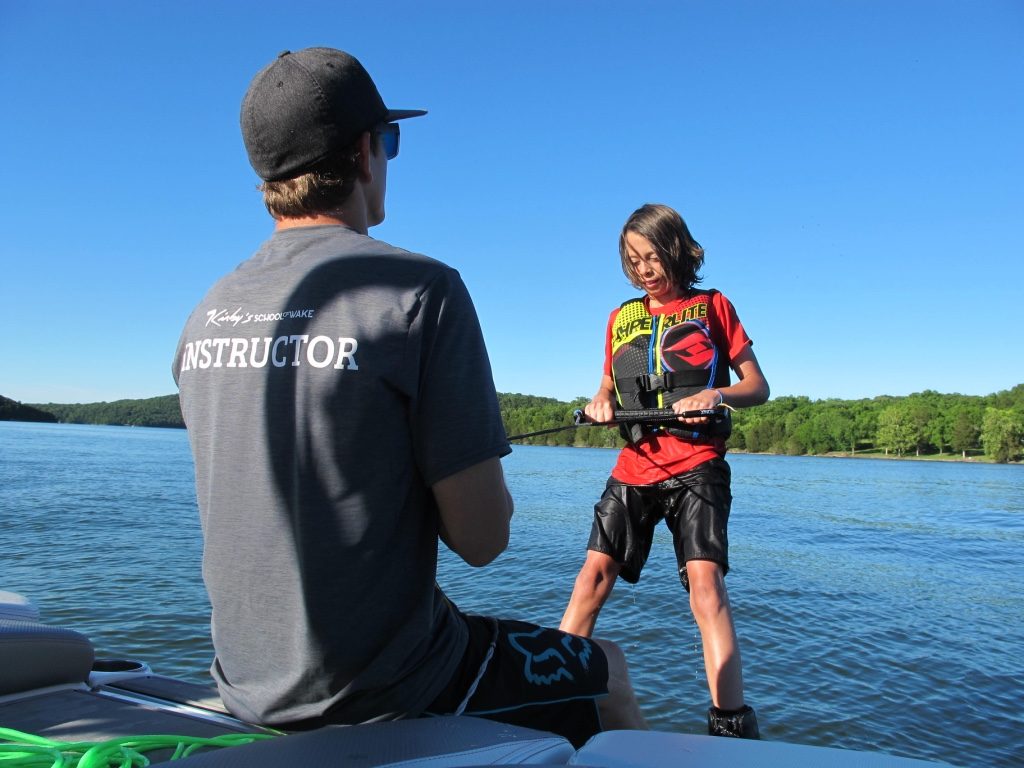 After a full day wakeboarding, the kids were able to listen to local pastor, Dennis Wright, from Freedom Church in Osage Beach. Dennis talked to the kids about the Bible story of the woman at the well. He explained that it was that woman’s moment. She had an encounter with Jesus, who knew her situation, knew her baggage, knew her shame and yet – still counted her worthy to hear the good news. That evening was that moment for seven campers who gave their lives to Christ. 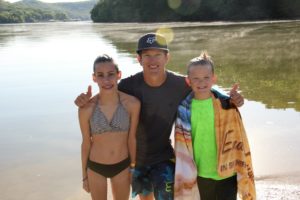 Early the next morning, Levi Dunahee and Jordan North chose to declare outwardly their decision to live for Christ by being baptized. Kirby had the honor of personally baptizing both Jordan and Levi. They came up out of the water to the cheering and clapping of their fellow campers celebrating with them. It was a very special moment and we hope to make this a tradition for those who would like to participate in the future.

The last wakeboarding set of camp is usually where the kids’ energy tank begins to run low. The boats once filled with chatty, excited kiddos transforms into silent campers napping in the sunshine while waiting their turn. 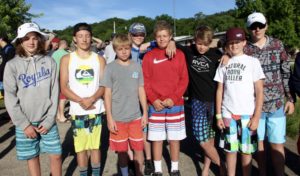 It’s always a bit sad seeing the kids pack up their bags to leave. The awards ceremony closed out camp with a slideshow of pictures taken throughout camp thanks to camp photographer Celinda Stamy and counselor, Holly Hazelton. These can be viewed on the Kirby’s School of Wake Facebook page. Four awards were given to campers. The Progression Award went to Destini Hendry for the most improved camper. The Wipe Out Award went to Rylee White. The Going For It award went to David Stever for completing a tantrum to blind. The Pass the Handle award, which recognizes the camper that showed exploratory leadership, went to Mikhale Johnson. The kids awarded the most impactful staff member of 2016 to Hayden Smith and Jake Lueck. Hayden and Jake served as coaches and assistant counselors. 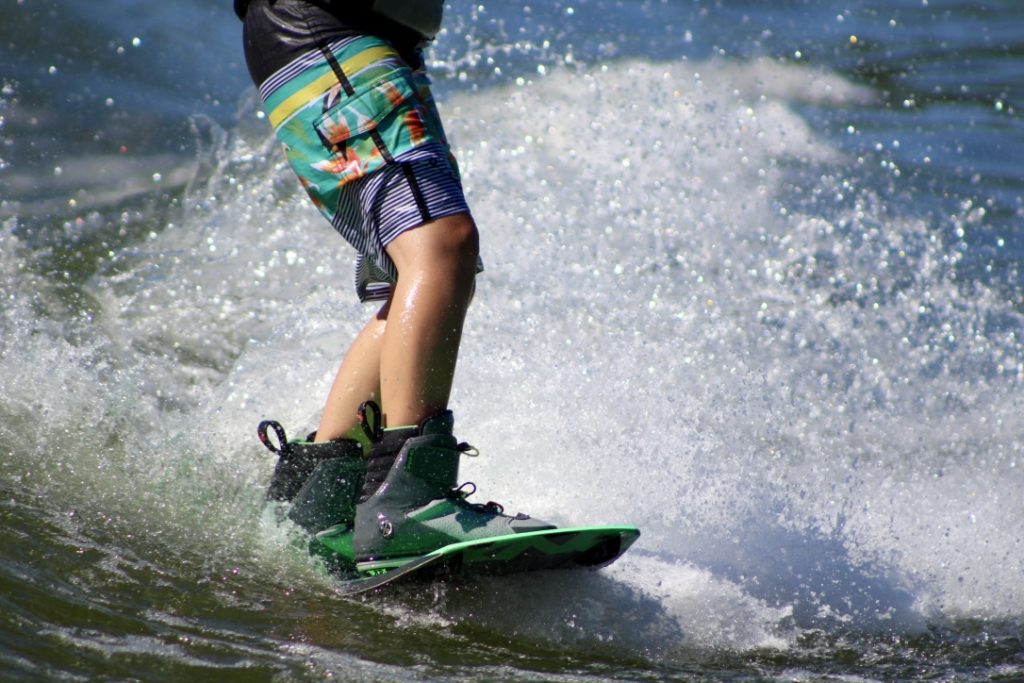 We are immensely grateful for all of our volunteers that took time out of their schedules to help make this camp possible. It wouldn’t happen without them. This year we had volunteers from Maine, Missouri, Iowa, Canada, Illinois, and California. If you would be interested in volunteering as a counselor next year, please contact Sydney at Sydney@kirbysschoolofwake.com.

We also would like to give a big thank you to Hy-Vee for donating ten cases of bottled water for the kids and to Woods Grocery Store for donating a $25 gift card that went towards the prizes. Thank you to Zinka for keeping the kids’ precious skin protected from the sun. Thank you to Wake Effects for donating three boats and thank you to our all of our other boat donors. Thank you to those of you who financially helped bring three wonderful kids to camp that wouldn’t have been able to attend otherwise. Thank you to Pastor Dennis and the Freedom Church Worship Band. Lastly, thank you to Dallas and Eternal Riders for all of their hard work in bringing this event to the Lake of the Ozarks once again.

We hope to see you at camp next summer!