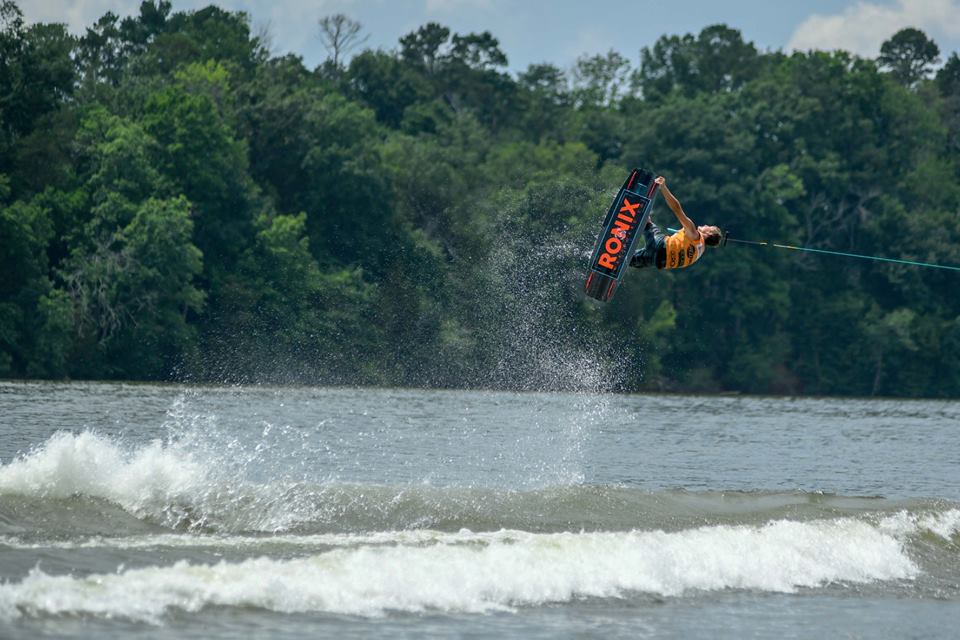 By Kirby's School of WakeAugust 2, 2018Blog
No Comments

I have been wakeboarding professionally for 12 years, worn hundreds of contest bibs, competed in heats with the best riders in the world, and traveled to the ends of the earth to compete and ride, but I have never had a contest experience like the one I had on June 30, 2018.

For many years, I stood on the starting dock, board strapped in, comp jersey on, and rope ready to toss to the official contest boat. I hungered for a good contest run. I so badly wanted the recognition and the sponsorship opportunities that came from a stellar performance.  I’d watch the competitor before me compete and feel my nerves start to build and my and become overcome with pressure: pressure to win, pressure to dig deep into my bag of tricks to simply match what others riders were doing, even if I wasn’t consistent on those tricks. The internal pressure to please others was legit.

Contest Tip: I don’t obsess over who is in my heat because I realized that it doesn’t matter. I go out and do the same thing regardless of who I am riding against so that I’m not intimidated and get into my own head.

Have you ever experienced something similar? Have you ever wanted something so badly? Year after year I’d stand on that starting dock and allow those feelings to rush back in. When my name was called, I’d jump off the starting dock and it was as if I wasn’t even present, my body wouldn’t cooperate with what my head wanted to do, and I’d choke. For a while there, I was traveling miles to contests only to not even make it through my first pass. After awhile, I couldn’t take losing like that anymore. By not being able to put together a contest pass would wreak me for weeks. I couldn’t take loosing to myself time and time again.

Contest Tip: I never think about my contest run on the days leading up to the contest.  I just simply show up to the dock, put my board on, and ride because this is my routine when I ride at home.

I’ve heard it said that micro decisions lead to macro results and that as a man thinks in his heart, so is he. My small decisions, my self focus…my pride…my decision to find my identity in the wrong thing, led to the macro results of me believing I wasn’t a good contest rider, I was never enough, and that I was a failure.

Contest Tip: Don’t lose sight of what’s most important. If you do have a bad run, simply go home with a determination to strengthen your weaknesses and come back stronger for the next contest.

We can sure get ourselves into a hole when we get sucked into self-centeredness, finding our identity in the wrong places. Three or so years ago, I had a shift in my perspective. It was about the time I released my blog about the World Championships in Portugal. You can read that HERE. Though I had been a Christian for many years, it suddenly dawned on me that I was doing this all wrong. I realized that my identity needed to be secure in the fact that I was God’s. It’s that simple. Since then I have changed my entire thinking on my pro wakeboard career. I have made a decision to press back on the feelings I had been accepting for so long, the feelings that almost led me to quitting wakeboarding. It didn’t happen overnight. It came one inch at a time.

All those years, I never fully understood that I was already accepted, already esteemed, and already noticed by God, and if He cares about me, then who cares if anyone else does. It freed me. It freed me to wakeboard for Him, as a form of worship. It makes wakeboarding fun again without the external pressure I previously had. It freed me to be me in an industry where I haven’t always felt accepted because I am no longer seeking it.

I had to change my thoughts and words to replace the death I had spoke and thought regarding contests to plant seeds with those words and thoughts of life and success and this time, I didn’t care about the notoriety. This time, all I cared about was blessing God and making His name great, loving Him no matter the results, and you know what? God is faithful.

I showed up at the Malibu Factory Pro in Loudon, Tennessee with Sydney and our pup, Maverick. It was a last minute decision to come and we were thrilled just to be able to see all of our friends and take a short getaway from the craziness of summer lessons. Saturday and Sunday of the competition were completely surreal. The peace I had while riding was like nothing I’ve ever experienced and somehow I found myself putting in stand up passes and advancing through the rounds. The next thing I knew, I was in the finals round in the pro men division…a life long dream of mine.

Contest Tip: Never think too far ahead, take one trick at a time and if you have a bobble, simply regroup and set up for your next trick. You have to be quick to forget and quick to move on to the next trick in a contest setting.

In my entire wakeboarding career I have never made a pro finals and here I was suddenly there and realizing that I didn’t have a double-up trick prepared (which in the eight man final was an added bonus).

By God’s grace, I stood up by finals pass with no falls. I laid it all out on the table and boosted a HUGE 3 on the massive Malibu M235 double up.  The support and cheering I received from my friends and fellow competitors blew me away.  Surreal is the only word I can think of to describe that day…surreal, and overcome by gratefulness. God was magnified that day. The work He has done in my heart is far from finished, but it’s due to that heart change that I walked away with a fifth place finish.

Contest Tip: Be yourself, don’t try to ride like everyone else. You ride the way you ride because that is your style. Embrace and be confident in your own style.

I wish I knew soooo long ago, the things I know now, BUT since I can’t you all get to learn from my mistakes. Here’s what you need to know:

In addition to God, I’m so grateful for my wife for standing by my side and walking through this crazy life with me, my family and sponsors and our wake community for their constant support and grace. Also a shout out to all my buddies who compete almost weekly on tour that dedicate their whole lives to giving their all to push the sport of wakeboarding and promote the sport we love. I have nothing but respect and admiration for you. Until next time!

(Also a big thank you to Rodrigo for the contest photo!)